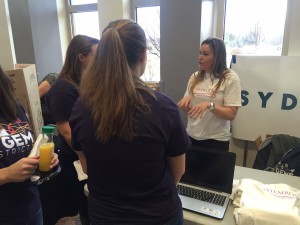 Encouraging girls to pursue careers in STEM, SYDCON doing their part this weekend.

In the last few years, there has been a dramatic push to increase women in STEM jobs. SYDCON is a proud believer in this movement, and encourage it for all. This weekend we were honored to take part in a local school district event. School districts D47 and D155 worked together to host their first ever GEMS Conference. GEMS = Girls in Engineering, Math, and Science.

This conference was strictly for middle school girls, grades 6-8. The event was initially slotted with 100 spots, but demand was so high and sold out in less than three hours. The event planners were able to increase the size to 125 girls. Our middle school daughter was one of the lucky participants.

The first hour of the conference was all about the vendors and allowing the girls to interact with business owners and industry leaders in STEM positions. They encouraged companies to send any female representatives they could. I, of course, was honored to participate. I met so many bright and excited young girls. As they approached our booth I excitedly asked each and every one of them "what type of tech interests you?". The answers I received were mixed, some were shy, some were unsure because their parents signed them up for this, but most were excited and had answers ranging from: robotics, neuroscience, computer science, healthcare and more.

As their answers rolled in, I was able to take the time to explain that here at SYDCON, we have the awesome ability to work with all of those tech industries. Because, as I explained programming/coding is a big part of all of the STEM-related jobs. Now, no, I am not saying that you need to code to have one of these jobs. But coding is what makes a lot of these jobs possible. In robotics, code is used to communicate with the robot, in neuroscience the researcher probably uses computer software to capture and study data, in healthcare programming and coding is responsible for many of the devices used every day in doctors office and hospitals around the world.

I had the pleasure of meeting an event volunteer high school senior who last year had the thrilling opportunity through Girls Who Code to do an internship at Amazon! She was so excited to learn we were a local software development company. She excitedly told me about learning JAVA, HTML and more and being able to code her own website from scratch! We discussed the Girls Who Code program and Made With Code and as she was moving on to visit other booths, she clutched one of my cards and eagerly asked me if she could send me her resume for maybe some spring break or summer job shadowing opportunities! I gave her a resounding "YES!". 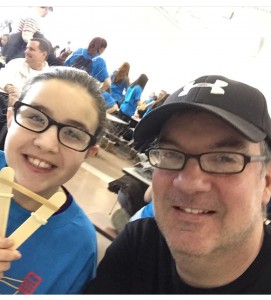 For the actual conference, a parent was required for the first 45 minutes in which they were faced with a challenge. Dave participated with our daughter while I finished up at our booth. They had to build a device that would shoot a cotton ball out of the tools provided, at least 3 feet, in 15 minutes.

When we picked up our daughter at the end, she excitedly told us she had fun and wants to partake in next year's event which the district pledge to double in size. She worked with a representative from a local Junior College and coded a website, she worked in a lab and made some cool slime. She interacted with high school senior girls excited about STEM that are pursuing science and health care classes in college next year. And, she interacted with girls her age also interested in STEM. Our daughter has participated in the Hour of Code and done other online coding tutorials geared towards kids. She at this age states she wants to be a meteorologist - a STEM job!

What I took the time to express to the girls and their parents as they stopped by our booth was that in all the STEM jobs they might be considering, programming is at the root of all those jobs. As they learn, complete labs, study for ACT/SAT, job hunt, learn hands on with devices, all of those things are tied to programming. Behind all of the medical devices, study software etc is custom software development. I also reminded them, that doesn't mean you have to be the coder. You can be the idea person, like me that works hand in hand with the coders to bring solutions to any industry. Having a job in tech/STEM is also about being able to think differently, think about how tech can be used to streamline a business, make life easier, create life changing/saving devices. So, it's important to understand code and how it can be used in all of the STEM jobs as well as jobs in other industries that are out there for them to pursue.

Overall this was a rewarding experience, one I look forward to participating in again next year. If you have a daughter interested in STEM, feel free to take a look at our GEMS page for some links to programs available to girls interested in technology. If you have a program or information you would like to share with these bright and eager young girls, share it with me and I will add it to the information page and share it with them.