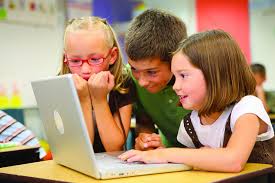 It's time Computer Science Education became a equal with reading, writing and arithmetic.

There has been plenty of talk in the news lately about the importance of Computer Science Education. And, this push is nothing new. We have been hearing it shouted from rooftops of the tech industry for the last few years. I mean, even the Hour of Code movement began in 2013. Here we are 3 years later and the movement is thriving and there is more and more talk of the importance of computer science education.

Just this week alone, I read two different articles about the importance of teaching kids to code. One, via the Huffington Post, equated teaching kids code to teaching kids Spanish. No they are not saying to stop making Spanish or a foreign language a requirement but they are saying why isn't computer programming, also a language be part of that curriculum requirement? Florida high school student Brooke Stewart says she would gladly swap two foreign language requirements for coding. As she stated, "You can translate languages across the Internet through coding, but you can't do that without coding,".

Also, in an article via Fast Company "The Case For Teaching Your Kids To Code", Zach Simms founder of CodeAcademy states that by 2020 the US will create 1.4 million jobs in the computer science related fields. Mr. Simms also believes that programming should be a fundamental part of early education and be the "Fourth 'R'" joining "reading, writing and arithmetic" making "Algorithms" the fourth R.   In the article Mr. Simms also states the importance of teaching kids to make mistakes and figure out how to fix them aka "debugging". He also encourages starting learning to code fundamentals as early as preschool.

Interestingly enough, when it comes to the STEM initiative, you see Math and Science classes required for a Computer Science degree.  In the school district, our kid's high school is in, advanced math is a required pre-requisite to even take a computer science class. But, you never see the flip side. Where is the requirement for computer science classes in math or science or healthcare degrees?  As we move into the future, computer science will be more and more evident in every job within the STEM movement, as we discussed in our blog last week, "Encouraging girls to pursue careers in STEM". As we told the girls we encountered, computers will be responsible for how you learn, how you do your STEM job and how we live daily life.

On January 30, 2016,  President Obama and the White House introduced its initiative "Computer Science for All" or "CS for All". The initiative calls for $4 billion in funding for states and $100 million directly for school districts. $135 million in funding will become available this year for Computer Science education.  According to the White House CS for All briefing, last year 600,000 high-paying tech jobs in the US went unfilled. They project by 2018 that 51 percent of STEM jobs will be in the computer science related field.

Based on the above information, isn't it time that computer science, programming/coding classes join the ranks of core education, as Mr. Simms suggested, become the "Fourth R"?  In my opinion, we should not be discouraging a high school freshman from taking a computer science and/or programming class because he or she has not yet started taking Geometry. This doesn't make sense when we are encouraging basic coding fundamentals in preschool. Yes, you will need math for a degree in computer science, but as the programmers in our office will tell you they use more everyday math in the majority of their high-end, custom coding. If a student shows the interest and enthusiasm with computers, we should encourage it. With the learn to code programs and websites available they can and will teach themselves without stepping foot in a Geometry class.  I am not saying take away math requirements, but should they be a pre-requisite? Many programmers are self-taught and not a conventional student. I am thrilled that the government and school districts are encouraging computer science in STEM, but we still need to come a long way in how we approach it in early learning and encourage it throughout the student life. Computer Science will be the backbone of jobs in the future, just as much as reading, writing, and arithmetic, it's time we give it equal time.